When I became a mom for the first time, the hardest adjustment was realizing that my time was no longer my own. Someone needed me almost every moment of every day. It was both exhilarating and completely exhausting. Things that used to be easy to get done felt nearly impossible. Finding time to eat and shower was hard enough, so when was I supposed to get alone in a quiet room, read my Bible, and talk to God? I had strived for years to make “quiet time” a priority in my routine and now all of a sudden it felt out of my control. I worried that my relationship with God would suffer and felt that I was constantly falling short.

I did the best I could in that season. Some days I found time and others I just managed to survive. I knew something had to change, so I decided to take a first step. I started by making it a point to spend time reading God’s word and praying as soon as I could get my daughter down for her first nap of the day. Even when I felt completely overwhelmed by all the things I hoped to get done during nap times, I tried to lay it all aside and do the most important thing.

I was by no means perfect at doing this, but I can tell you one thing; God met me every time, with whatever little I had to offer.

Sometimes it was literally three minutes before my daughter began crying again. Time and time again, God honored the effort of making Him first in my life. More important than clean clothes, a picked up house, and dinner on the table. I began to notice on the days that I was most overwhelmed by chores and my to-do list that when I put my time with God before those things, everything managed to get done. His kindness is amazing!

And then my son came along. In this new season, it has become even harder to find moments alone. There just aren’t many. My kids don’t often nap at the same time and aren’t great sleepers in general. Those first few months of transitioning to life with two children were rough. We still have hard days! I really struggled with feelings of frustration and guilt that I couldn’t get alone and spend time with God the way I had in the past and in the way I thought was expected.

But that’s when God was so gracious and showed me that I had made spending time with Him into a formula. I had put Him in a box and believed that the only way to grow in my walk with God was to be by myself in a quiet space with worship in the background, reading His word and maybe journaling. My life had become messy. But I knew God still loved me, and surely, He still wanted a vibrant relationship with me, even as a mother!

So I began to give him what I had. He wanted to open my eyes to a new way of spending time with Him that is more than acceptable, even though it may be a little unorthodox.

The first real breakthrough moment came for me one early morning around 5:30 when my son was awake but my daughter was still asleep. I put Josiah into a bouncer, grabbed my Bible and asked God to speak to me. It wasn’t quiet and I wasn’t alone, but God was there.

As my son bounced up and down squeeling, I felt this peace wash over me and I knew that God still wanted me and still wanted me to grow in Him. Motherhood does not disqualify me or even give me an exemption from meeting with Him. As moms, we just have to be willing to get a little more creative and to see that spending time with Him can happen in the most mundane or most chaotic moments of the day. That morning, I only read about two psalms before my daughter woke up, but Jesus began to open my eyes to the beauty in that messy time with Him. It counted and it mattered.

You might be reading your Bible while one kid is napping and another is playing a game or watching a show. Perhaps you review verses you know as you put your kids to sleep or pray during those midnight feedings. In whatever ways you open your arms to God, I can assure you that He will be right their waiting. Those who seek Him will find Him. He adores showing us more of Himself and never bypasses a chance to do that.

I believe motherhood is painstakingly hard by design. God wants us to need Him more than we ever imagined possible. To become less about ourselves and more about Him. So, try it. Give Him what you’ve got and watch Him meet you in His kindness and faithfulness. No matter where you are or what season you are in, He is there, and He doesn’t have rules about what your time with Him has to look like. 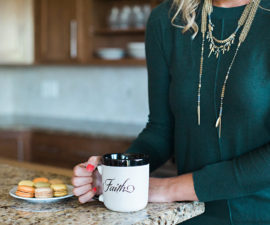 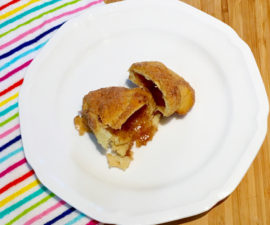 Making Resurrection Rolls with your children on Easter is a …
April 8, 2017